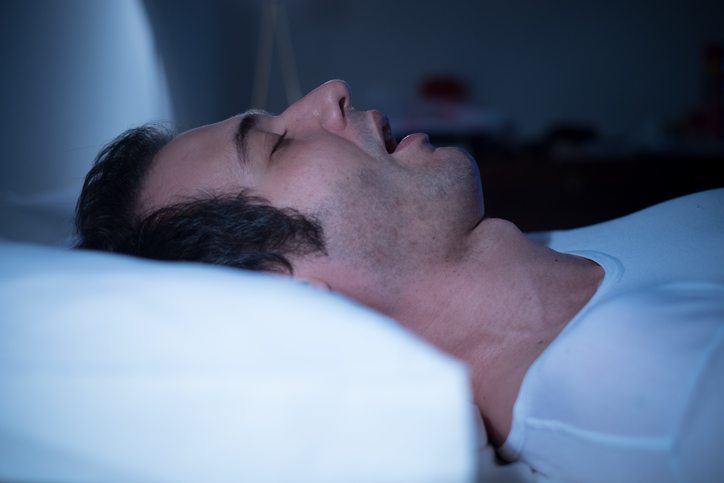 Many of our patients at SleepRight McKinney discover they have obstructive sleep apnea when searching for answers on how to stop snoring at night. However, when they do realize that their difficulty getting a good night’s rest comes from a treatable disorder rather than from trouble relaxing, Dr. Lawrence can provide a solution for dealing with apnea before the condition can spiral out of control.

When left untreated, sleep apnea increases a patient’s risk for a variety of serious health conditions, include high blood pressure, stroke and heart disease. While sleep apnea is a known risk factor for stroke, a new study suggests that treating the condition might also help patients who have suffered a stroke or mini-stroke better recover.

Patients involved in the study were more likely to wear a CPAP mask – or continuous positive airway pressure – to treat their apnea and help them sleep better at night, while also helping to stop snoring.

Researchers discovered that among the stroke patients involved in the study, treatment of sleep apnea provided significant benefits, even more so than the benefits offered by tPA, a stroke treatment drug approved by the FDA.

At SleepRight McKinney, Dr. Lawrence offers our patients a variety of options when it comes to finding the right treatment for sleep apnea. While researchers involved in this latest study only examined participants who used CPAP devices, other options for the treatment of apnea – such as oral mouthpieces and NightLase – were not shown to improve stroke recovery.

According to the research team, sleep apnea commonly affects patients who have experienced a stroke or mini-stroke, but few actually have received a sleep apnea diagnosis or treatment for the condition. Researchers estimate that two out of every three stroke patients have sleep apnea, which cause irregular breathing during sleep. Sleep apnea can cause oxygen levels in the brain to drop, hypertension and an irregular heartbeat in patients.

In this most recent study, researchers from the Regenstrief Institute and Roudebush VA Medical Center in Indianapolis followed the cases of 252 patients who has experienced a stroke or mini-stroke for up to 12 months. All of the participants in the study received stroke treatment at one of five hospitals located in two states.

The participants were randomly divided into three groups: a control group who received standard stroke care that did not include treatment for apnea; a group that received the standard level of care plus CPAP apnea treatment; and an enhanced care group that included CPAP treatments. Participants who used CPAP did so for an average of 50 percent of nights sleeping.

After examining their collected data, researchers found that 59 percent of the patients who received CPAP therapy showed significant improvement in their recovery, in terms of improvements in neurological symptoms. This was in contrast to the 38 percent of patients in the control group who showed some improvements without receiving CPAP care.

Researchers believe that the timing of the care participants received may also play an important role.

The team found data to support the idea that treating stroke patients for sleep apnea is key to enabling a faster recovery.

“Usually, diagnosing sleep apnea is an outpatient service. But we need to make sleep testing acutely available to stroke and TIA patients in the hospital as part of their work-up, just as we do brain imaging, lab testing and cardiac monitoring as part of the initial stroke/TIA evaluation” wrote researchers.

The results of this study have attracted the attention of other stroke experts who believe that treating apnea could have some interesting applications in not only helping stroke patients recover faster, but also in helping improve the general health of patients as well.

The next stage for researchers is to determine what type of recovery rate might be possible if stroke patients wore a CPAP or other apnea treatment device more than 50 percent of the time.